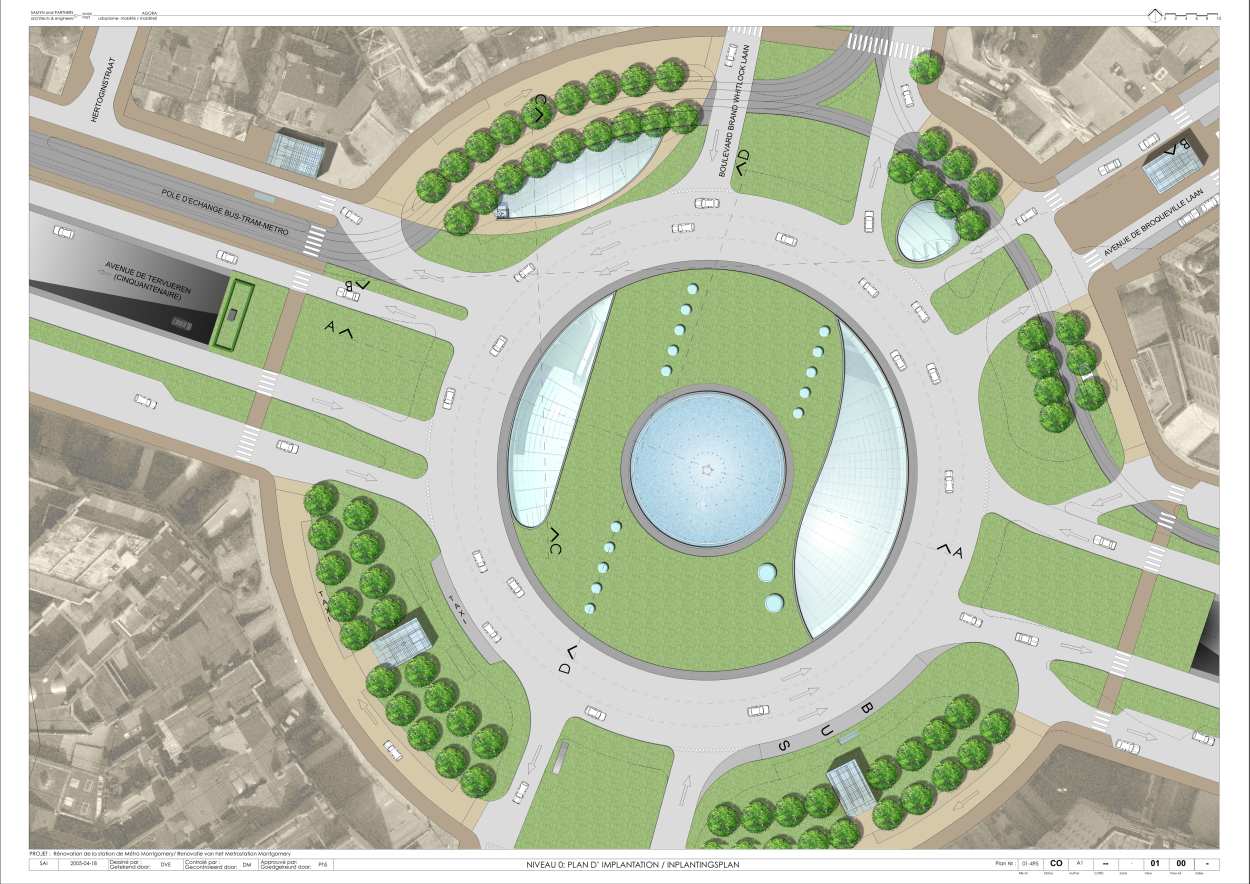 495-Renovation of the Montgomery Metro Station

This project aims to substantially improve several negative aspects of the existing station – the lack of security and the opportunities for vandalism in the long and dark corridors ; the mediocrity of space readability and orientation ; the aboveground structures and layout, which overly favours automobiles at this time.

The project principally seeks to bring natural light into the deepest recesses of the station. Four openings are made in the platform that covers the station and these are sealed by dome-shaped glass structures. Below these skylights, the existing platforms and ceilings are pierced by additional openings or eliminated altogether in some places and replaced by rows of columns so as to enable a direct transversal view across the various zones of the station.
•    Vertical circulation originating from the right of the Cinquantenaire entrance is bordered along its entire length by lateral and highly-lit light wells, which are adorned with hydroponically cultivated greenery (a first for Brussels.)
•    Access to the pre-metro platforms (level -1) is covered by a vast glass ceiling that also covers the deep light wells, which provide the lighting for the central mezzanine access entrance–formerly dark and confining–and transforms it into a large and airy passageway.
•    On the side of the Avenue de Broqueville, a large round window (oculus) lights the corridor leading to the central mezzanine. An opening in the floor at level -2 allows natural light to penetrate to the metro platforms at level -3.
•    Finallly, on the side of Tervuren, the existing access corridors, which are particularly insecure, are replaced by a new multi-tiered space destined for cultural purposes and covered by large glass structure.

The areas where natural light penetrates are thus connected to the areas where the space expands and thus improve global perception and readability of the space itself. The correct orientation of public transportation users is greatly enhanced.

Automobile circulation on the surface is made more secure and pleasant:
•    The circular is reduced from 4 lanes to 3 lanes.
•    Certain entrances and exits are re-traced in order to control speed, reduce pedestrian crossing and provide an easily readable hierarchical order to the central and lateral lanes.
•    The local roads leading to the circular are re-classified as residential zones.
Pedestrian circulation is rationalised.
The circulation schema for public transport is significantly modified with a view to enhance commercial speed and route length. A major exchange hub is created to the right of the entrance to the central underground mezzanine on the side of the Cinquantenaire by the installation of the infrastructure for several tram lines and buses, and by the suppression of a tram loop, which is rendered unnecessary by the new schema.

The means of access to the various zones of the station are radically simplified. At present, there are too many escalators and staircases, which make the clear perception of the space and the correct orientation of users confusing as well as uselessly prolonging the time it take to get from one place to another. The transparency that this project brings to the station authorises the reduction in the number of connections as well as reducing the length of the trajectories :
•    The principle corridor at level -1, which leads to the central mezzanine, becomes a vast hallway illuminated by natural light and on the same level as the pre-metro platforms.
•    Panoramic elevators are installed at strategic points and connect all the levels. One of them takes passengers to the surface level and thus offers persons with reduced mobility direct access to all the levels from the bus-tram-metro exchange hub at the surface.
•    The connections between the central mezzanine and the metro level are simplified by the elimination of escalators and stairways that have become unnecessary.
This simplification will also result in significant cost reductions in exploitation costs.

INTEGRATION OF WORKS OF ART

This project includes the dismantling, restoration and re-installation (on site or at another site) of the painting on canvas, “Magic City” by Jean-Michel Folon. The two other works (“Thema” by Pol Mara and “Rhytme Bruxellois” by Jo Delahaut) are in an excellent state of conservation. They are not affected by the project and will be preserved in their present state.

The noise that is generated by the entrance of the metro and tram lines into the station is currently a significant nuisance.
The numerous openings that the project foresees in the various partitions provide a large volume for acoustical energy diffusion and, in themselves, enhance the acoustic comfort of the station’s users. What’s more, acoustic absorption panels filled with fibreglass wool and covered by perforated metal sheeting will be placed above the metro and pre-metro platforms to absorb the noise as near as possible to its source and enhance the clarity of the announcements over the public address system.  These panels integrate the different systems, electric or otherwise, necessary for the good functioning of the station (basic lighting, security systems, signalisation systems, public address, fire protection, etc.)

The vast central volume, open and airy, provides the opportunity to establish a meeting place with a high commercial and cultural value.
The new multi-tiered space can be beneficially used as an exhibition space: for example, in partnership with the Museum of the Cinquantenaire, which is nearby.
Commercial activity is concentrated around the grand central mezzanine (-2) where the available volumes are exploited in function of the potentialities of the rooms.

The Montgomery circular constitutes the cross point of two major urban axes and is completed by a fifth branch (the Avenue de Brocqueville.)
The project takes advantage of the suppression of one of the four concentric lanes of traffic by planting high-trunk trees in order to complete the existing double crown, which currently presents several weaknesses.
The existing central fountain is preserved and is surrounded and enhanced by the new glass structures. The entirety of the renovation work scrupulously respects the principles of geometric order of the existing space.

The project is characterised by a pragmatic technical approach.  Changes to the existing concrete structure use proven and economical techniques. For each intervention, the search for maximum transparency ceases at the point where the technical solutions to be used risk becoming too sophisticated.