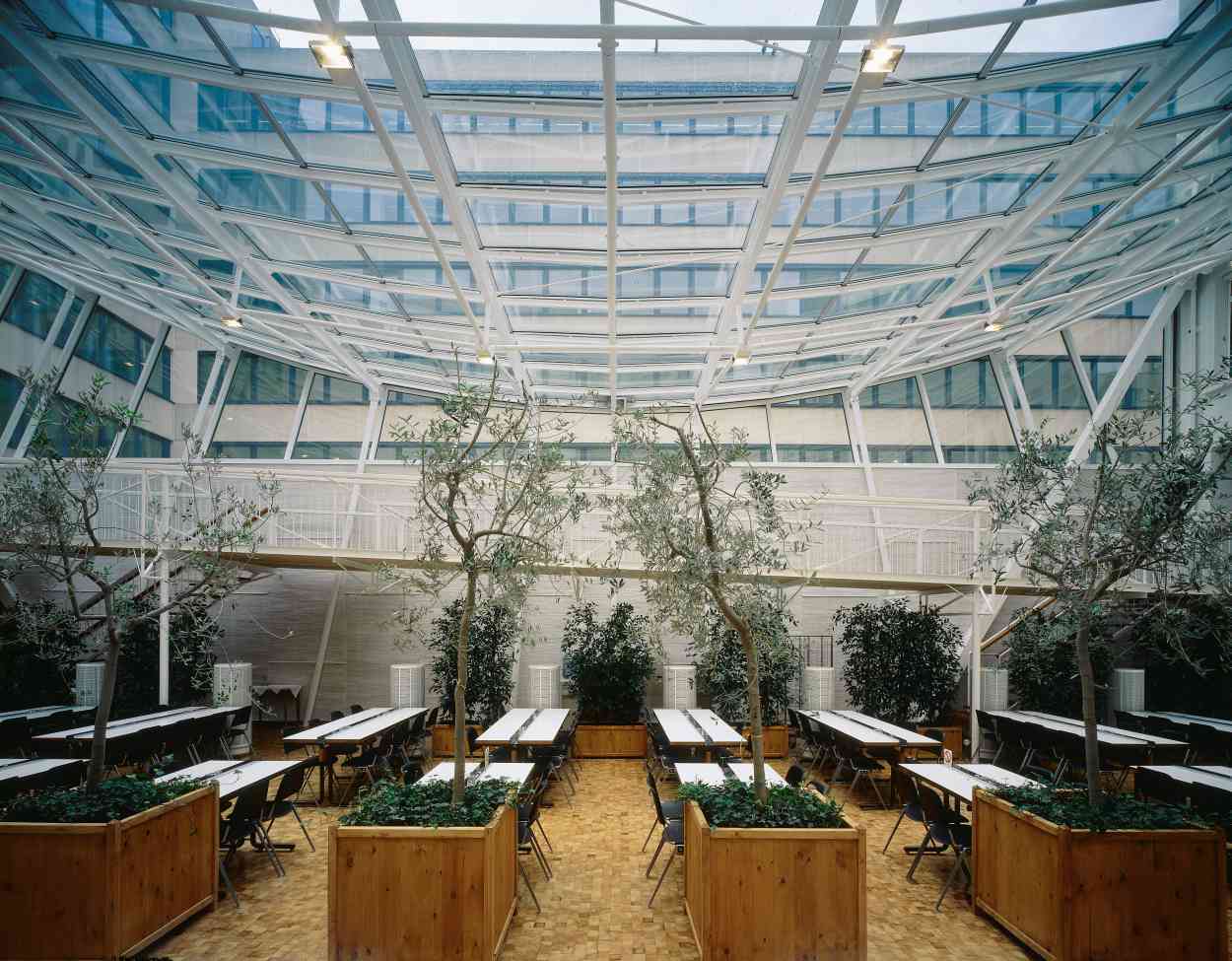 The mansion located 14 rue Guimard, built in 1851 on a design by architect F. Derre, is one of the few remaining mansions characteristic of that period in the neighbourhood.

On July 10, 1993, the regional authorities listed certain features of the building: its facade, the vaulted cellars, the carriage entrance (porte cochere), the entry hall, the monumental staircase and the first floor reception rooms. The original building has a 13 m wide street front facing south and an overall depth of 15.5 m, with a garden 35 m deep.

Over time, the building was transformed and a number of additions were built at the rear. The property is backed to the north by a small five-floor office building that already belongs to Petrofina whose offices covers most of the city block.

The existing executive dining room, on the fifth floor of 52 rue de l’Industrie, and the employee’s dining room, formerly in the basement of Fina, 37 rue de la Science, were to be grouped on the site at 14 rue Guimard.
The project expresses the oil company’s corporate identity objectives: transparency, openness and humanism.

The extensions at the rear of the building are all replaced by a large glass awning suspended between the rear facade of the mansion and the small office building. This awning covers the employee dining room, giving it the atmosphere of a garden restaurant.

A second restaurant area is located on a first floor terrace along the rear north facade of the mansion, over the food distribution area of the lower restaurant.

The ground floor of the mansion is converted: the restored original carriage entrance gives almost direct access to the employee dining room. The entry hall contains the monumental front staircase, leading to the first floor reception and executive dining rooms, and the staircase leading to the vaulted cellars. The remodelled cellars serve as technical service spaces as well as cloak rooms and sanitary room for the kitchen personnel.

Thermal and acoustic comfort in the restaurants is given particular attention: the glass roof has a retractable cloth awning and the party walls are covered with greenery.

An elevated walkway leads from the first floor restaurant to the garden of the Petrofina headquarters, via the small office building, allowing direct access to the food distribution area.

A vast basement links the vaulted cellars with the headquarters’ infrastructure area; it contains the washing and waste areas for the restaurant as well as storage space.

The Petrofina Company Restaurant was awarded: