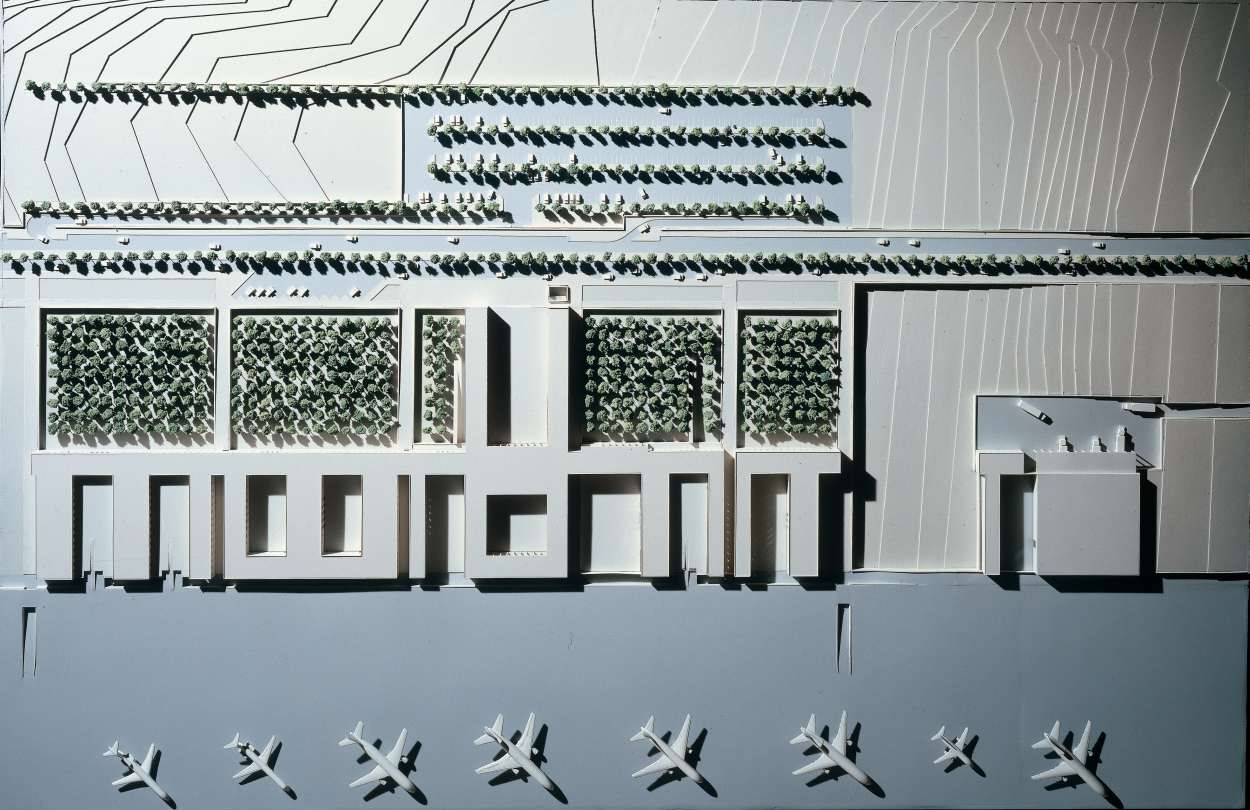 Luqa is a Mediterranean island, off the beaten track, but where Occidental and Arab civilisations meet.

With its fast growing potential for tourism, the island has decided to build a new airport to better accommodate the increasing flow of tourists and visiting emigrants.

Why not use the gold and ochre island itself as a source of inspiration for a vast project?

International airports are the gateways to the sky of modern times. Clearly, their architecture has been inspired by the technological aura of the aeronautic industry. As a result the architectural expression, which has now become commonplace, is often better adapted to temperate and rainy climates: bold structures and framework clad in a profusion of metal and glass.

But why not look at the question from another standpoint? Why shouldn’t an airport be the gateway to the Earth, as sea harbours have always been?

So from the outset, this project opted for the creation of an airport as a counterpart to the La Valetta seaport. The site is particularly well suited to this, since it stands on the top of a rise sloping gently to the harbour town.

The functional program was developed alongside a typo-morphological analysis of construction in Malta. The combination of the two has determined the general lay-out.

The entrance takes the form of a central square facing the town, lined with gates on two levels where the two flows of arriving and departing meet. An indoor avenue runs lengthwise through the square to connect the departure and arrival areas located at either end.

All of the related functions are organised around large courtyards opening on to this single axis which provides structure and coherence to the whole.

These squares, avenues and courtyards thus become elements reflecting the local urban fibre and recalling the long straight walls which mark the entrance to the port.

Passengers use the upper level of the structure. They are separated at the entrance from the flow of baggage which circulates on the lower level.

The typical dimensions of the units recall those of the city blocks of Malta (La Valetta, Median). The natural yellow/ochre stone used for the façades, the shape of the bays and the traditional two-story construction recall the island’s major monuments (Palace of the Great Knights, the Hospital).

The airport can accommodate up to 5 million passengers per year- 1650 per hour at peak times. An open-air parking lot for 450 cars is located in the foreground below the entrance level.

This project attempts to demonstrate the potential effectiveness of using an architectural language based on historical elements.

The large but simple construction offers lower costs due to the repetition of elements and the use of common local building techniques.

We suggest a contrast to “space vessel airports” with an “airport-town” in a modern and non-romantic construction, but which does not hesitate to make reference to traditional typologies.

More simply, this project is an intention to propose a perfectly functional, technologically adapted airport whose architecture would first and foremost announce the friendly, hospitable spirit of Malta.