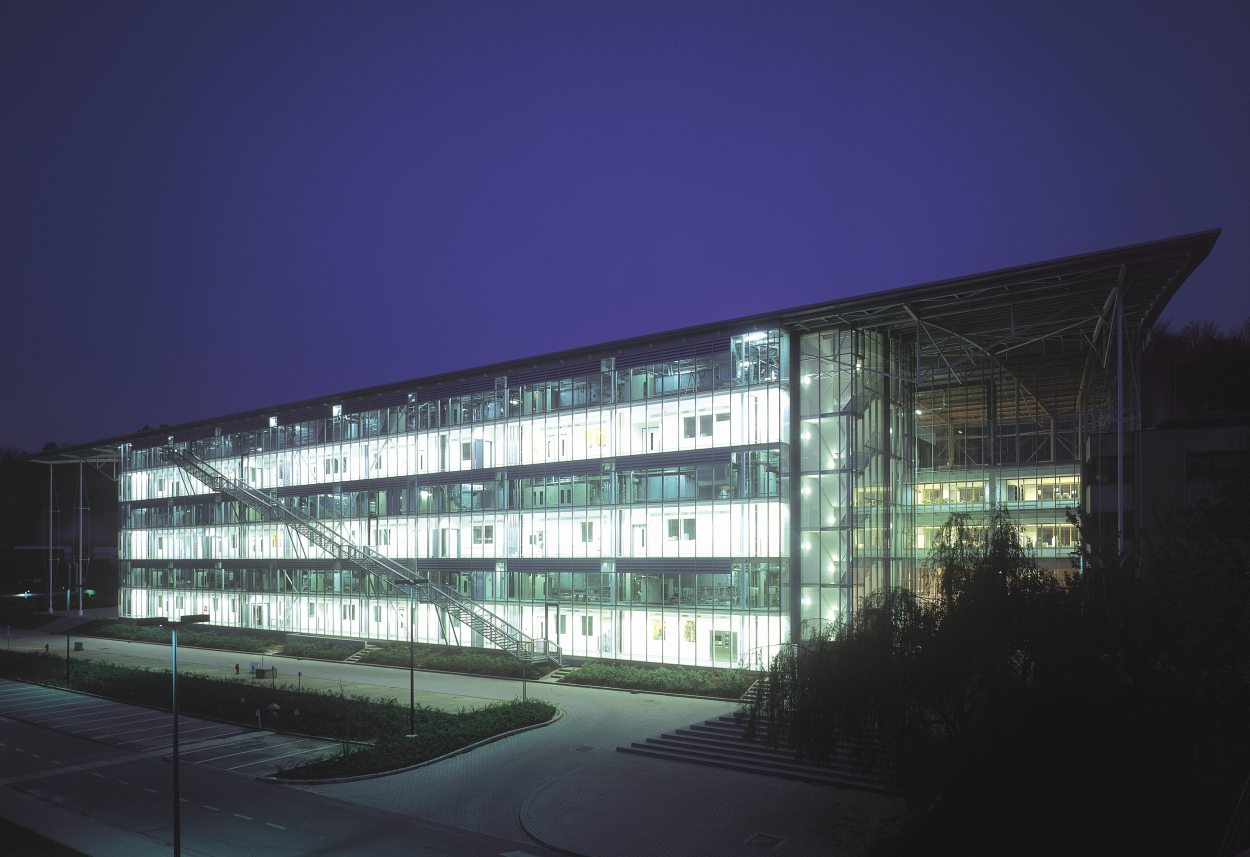 SmithKline Beecham Biologicals s.a. has been located in Rixensart for over forty years. The site of the company runs parallel to rue de la Hulpe, and is perpendicular to the rue de l’Institut, from where the site is accessed at number 89.

In order to respond to the expansion of functions and staff, two buildings were added to the site, in the central area : the north building which is to house administrative activities (arch. ELD), and the south building which is to shelter research and development activities. This central area thus becomes the focus of the company’s activities. Parallel with the construction of these two buildings, an extensive landscaping study was also carried out by Samyn and Partners in order to give the site its final configuration.

The plan for the Research Centre is based upon three primary principles :

– A close relationship between management and research;
– The integration of the building with adjacent structures that are also used for research and development to create synergy among the researchers;
– The creation of a new complex around which all activities carried out on the site are centered.

The existing adjacent structures are renovated, transformed and extended to included a new auditorium, to enlarge the library and to create a central lounge and meeting area accessible both to people engaged in research and to administration staff, thus fostering synergy among the company’s employees.

The new building contains three floors of laboratories and a basement level for technical functions. Between each of the three levels, an accessible technical floor provides space for the technical equipment needed and lends flexibility for future development of activities.
The space between the existing and the new buildings is covered to create an atrium.

The three main parts (atrium, meeting area and auditorium, and administration centre) are accessible via an annular passageway that links all functions.

On the South side of the new buildings, 5 levels of offices are laid out along the atrium, adjacent to the laboratories and intermediate technical floors.

The new building is designed in a sober style; fully glazed, it is perfectly transparent, both from exterior to interior and between the various areas inside the building. Natural light can thus reach the borders of the laboratories.

A lightweight metallic roof, partially glazed on the South and West sides, covers the atrium, overhangs to both the East and West, and is supported by shrouded columns that define the two main entrances to the complex.

Vertical circulation is divided along the West, East and South facades. The East and West shafts are glazed volumes containing a concrete staircase and one or more glazed elevators. The South staircases, made of metal and wood, open onto the atrium; the elevators are glazed. The exterior emergency staircases are constructed in galvanised steel on the North side of the main building and at the back of the atrium on the South side of the secondary building.

The Smithkline Beecham building was awarded: