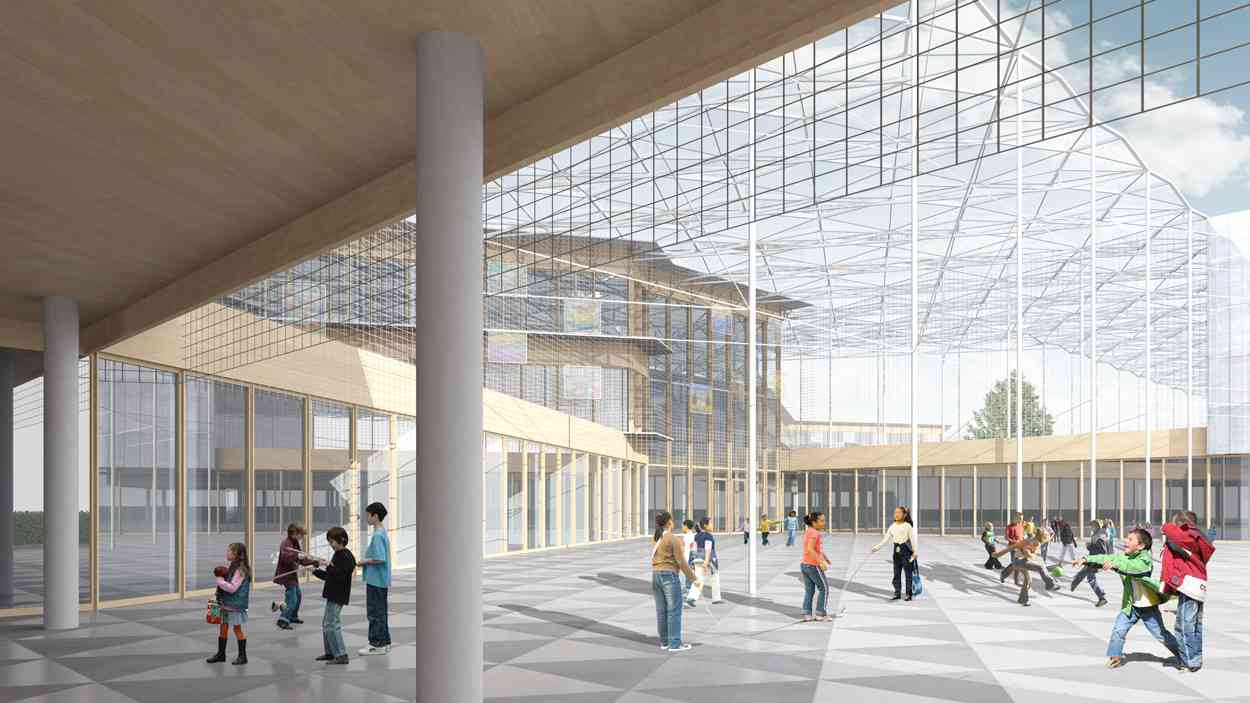 A place for encounter and exchange

The site is at the centre of a new urbanisation project. Three types of layout are developed. To the north, islands are constructed following oblique lines; to the south, the access paths and islands follow an orthogonal plan; and to the east, more random paths crisscross the park.

The new educational centre of Belval brings together these various dynamics. An architecture phased with the urbanisation project and integrated with its environment is proposed.

The educational centre is also composed of three main elements (the school, the before- and after-school centre and the sports hall) that, while functioning independently of one another, are articulated around the same core.

The disposition of the buildings is dictated by a search for compactness and economy as to the occupation of the terrain.

The entrance to the educational centre is on the west side, thus optimally freeing-up the east side, that of the park.

It is thus to the west that we find the outer courtyard, the kiss and drop area, and the parking area for buses. This public space constitutes a buffer zone between the school and neighbouring residences.

This area gives access to a first inner courtyard, then on to a large multi-purpose hall, a central core leading on to various units of the educational centre.

The proposed project is based on the security and the accessibility for persons of reduced mobility.
The spaces destined for the youngest pupils are exclusively implanted at street level, including the access to the sports hall. The primary school classes are distributed in the upper levels.
No superfluous levels are planned; the conduits replace the traditional borders.

The interior circulation paths are short, clear and illuminated with natural light. The school and the before- and after-school centre together contain three main paths of vertical circulation (a central path, and two paths on either end) that are amply glassed and provide different perspectives on the exterior landscape.

The sports hall has its own vertical circulation path that is composed of a principal stairway and two emergency stairways.

Next to the main lift, a service lift is envisaged for deliveries from the kitchen to the upper floors and to the before-and after-school centre.

The envelope and the structure

The facades are vast display windows, or “libraries” in wood and transparent double-glazing with a high insulation index.

The window frames develop from the height of a window seat up until ceiling height in each classroom, in order for the maximum amount of light to penetrate. They are, in part, intended to receive successive generations of multi-coloured children’s drawings: sometimes transparent, sometime opaque.

Every other window frame opens on to the balconies that protect the wood from weathering and facilitate maintenance.

A 12-cm x 12-cm meshed metal grill borders the balconies in order to ensure security of access. It supports the sunscreens (thus the windows open to a large area of fresh air ensuring comfort in the summer months.)
Clear and laminated 1.2-m x 1.2-m windows (the exterior surface can also be cleaned from the balconies) are disposed along a random thread in the mesh, providing varying views on the exterior. They can also be decorated with children’s drawings.

The structural rhythm of the building is regular and allows for, if so wished, for a construction entirely in wood.

The roofs are covered in vegetation.

The integration of green spaces is primordial in the project.
On the east side, the building is open, allowing the park to penetrate in the interior. That is where the educational garden is located, protected from various stray balls; a low beech hedge delimits it.
To the south, a pedestrian path is traced in front of the façade of the sports hall in order to reconcile its scale with that of the residential structures.
To the north, the implantation also takes into account the steep wooded bank as well as the pedestrian and bicycle paths embellished with the water stairwell that borders it.
To the northwest, at the place where the woods end, the building extends onto the bank so as to provide a point of reference, to give it its own façade and to open onto a perspective of the surrounding nature.
To the southwest, the parking is situated slightly below level and is landscaped so as to hide the parked vehicles. Because it is on the surface, no artificial lighting or additional ventilation is necessary.

Recreation
Five zones are dedicated to recreation areas: the outer entrance courtyard, a protected central courtyard for the youngest pupils, a courtyard that gives onto the park for the primary school pupils and two courtyards on the first floor, covered with glass and protected by vertical nets. One is situated between the school and the before-and after-school centre, and the other is situated above the cloakrooms of the sports hall (for various ballgames with goals). The tubular trellis structure of the glasshouse in inverted, hexagonal pyramids on the playground contains the rainwater evacuation system.

Sports hall
This is a translucent, high-insulation index box protected from the sun by expanded metal that lets natural diffused light penetrate into the hall.
The complex is directly accessible from the school by a covered and closed passageway; it is easily accessible to other local users.
The seating is disposed along two gallery levels along the walls of the sports hall, which ensures a great deal of flexibility for the spectators. The hall is also visible from the refreshment bar accessible to persons of reduced mobility. Giving onto the outer entrance, both the cafeteria and the sports hall can easily be used during other school events.

Extensions
The school and the before- and after-school centre are situated so as to be extendable according to the future development of the institution. Two volumes that will attach themselves to that of the first phase of construction are foreseen. The stairways are situated in such a manner as to accommodate eventual extensions.