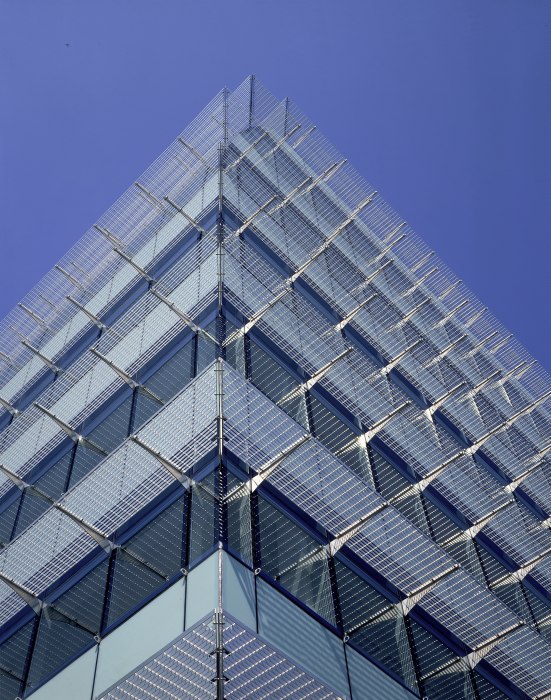 The prestigious location, along the Cinquantenaire-Jubileum Park, is located between a fashionable Art Nouveau housing area on Avenue Michel-Ange and office complexes on the Avenue de Cortenberg.
The project comprises the restoration of three town houses, the construction of a luxurious office building, and the landscaping of the surrounding public spaces.

The construction of an office building on the corner of those two avenues raises important questions about the architectural nature of urban integration. On the Avenue de Cortenberg, the building ends a gloomy collection of office buildings, while two traditional facades, remaining as resistants of another age on this avenue, had to be disassembled and rebuilt in a better location on the Avenue Michel-Ange. The worth to save such facades, that no one can build anymore and that can contribute to restore the urban fabric where it is still possible, imposed itself at early stages of the project.

The narrowness of the plot and the will to restore the three neighbouring houses as a part of the project let little composition latitude.
A straightforward caesura might give an easy and logical answer, but there is not enough space for it.

Such a context asks for a lucid expression of function, with a special attention to the building scale and its possible readings, from afar as well as from near.

The neighbouring office buildings present receding superior levels that torment the structure and impose “tour de force” about water-tightness.
In order to avoid these technological pangs, the project envelope is an asymmetrically curved facade-roof wich furthermore reduces the size of the building and makes easier the transition between the dramatically different scale of buildings that characterise the two avenues.

The double curvature of the facade-roof also imposes itself for the outlining of the building scale, and enlivens the diagonal view of the volume from the Avenue de la Joyeuse Entrée.

Materials of the “dwelling” part (old facades) are preserved, while those of the “office” part (new volume) are of the most recent techniques.

A facade hung on a concrete or steel frame can only be light. The building skin is composed of horizontal rows of alternate frameless panels of clear glass and enamelled white glass headbands. The delicate palette, resulting of the soft nuances between the different types of glasses used on this very precise building, is of a kind that passers-by are taking pleasure to discover.

The curving of the facades gives the impresion that light flows along the glazed surfaces, thus reducing the building’s light reflecting mass, while the convex shape casts minimum shadow on the facing townhouses. Horizontally is just outlined by galvanised-steel catwalks which provide shade and allow for the cleaning of the facade.

The project also pays a special attention to the surroundings. A planted piazza is designed to close the Avenue Michel-Ange in a dead end. Trees, whose height correspond to the cornice of houses, requalify the scale of the new building. With hedges to their feet, they assure besides an acoustic filter, a filter to dusts and a shield to the dirt of the Avenue de Cortenberg.