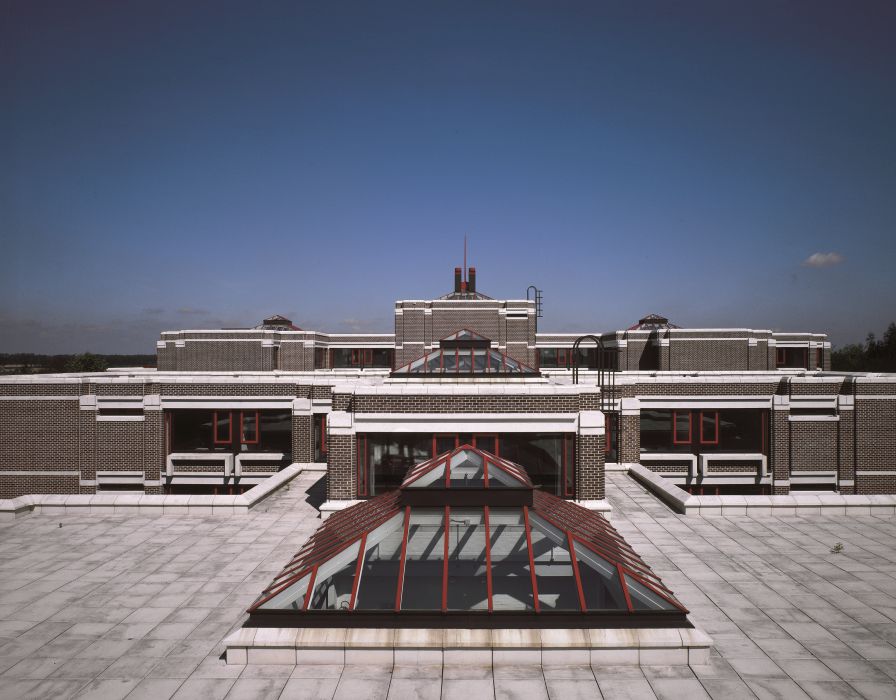 The classroom building of the “Athenée Royal” in Waterloo is part of a larger architectural study on the same site, comprising a pre-school, primary school, restaurant, dormitories, athletic facilities and swimming pool.

Because Belgian school buildings may be used for other purposes in case of natural disaster or war, it is necessary to conceive of a structure that can accommodate other uses, such as housing, civil administration, industry, commerce or research.

The building has five main zones. The outermost zones are used for libraries, administration and teaching facilities ; the intermediate zones contain non-technical classrooms ; and the central zone contains technical classrooms, such as laboratories and workshops. Two communication courtyards are centrally situated on two levels of the building.

One of the noteworthy aspects of the building is its basic structure. The framework for the large square modules is a pair of girders between which the main cable ducts and vertical cables are installed. Flight paths for horizontal layout of ducts and cables are clearly assigned in the secondary-use space. Interior brick partitions are moveable.

The building also features structural materials common in Belgium, such as reinforced concrete and masonry. As a result, the building was, at the time of its construction, the least expensive building per meter squared erected in Belgium. Despite its simple architectural finishing, the structure of the classroom building served as model for other buildings, even as long as ten years after its construction (for example in the Brussimmo building), because of its technological coherence.