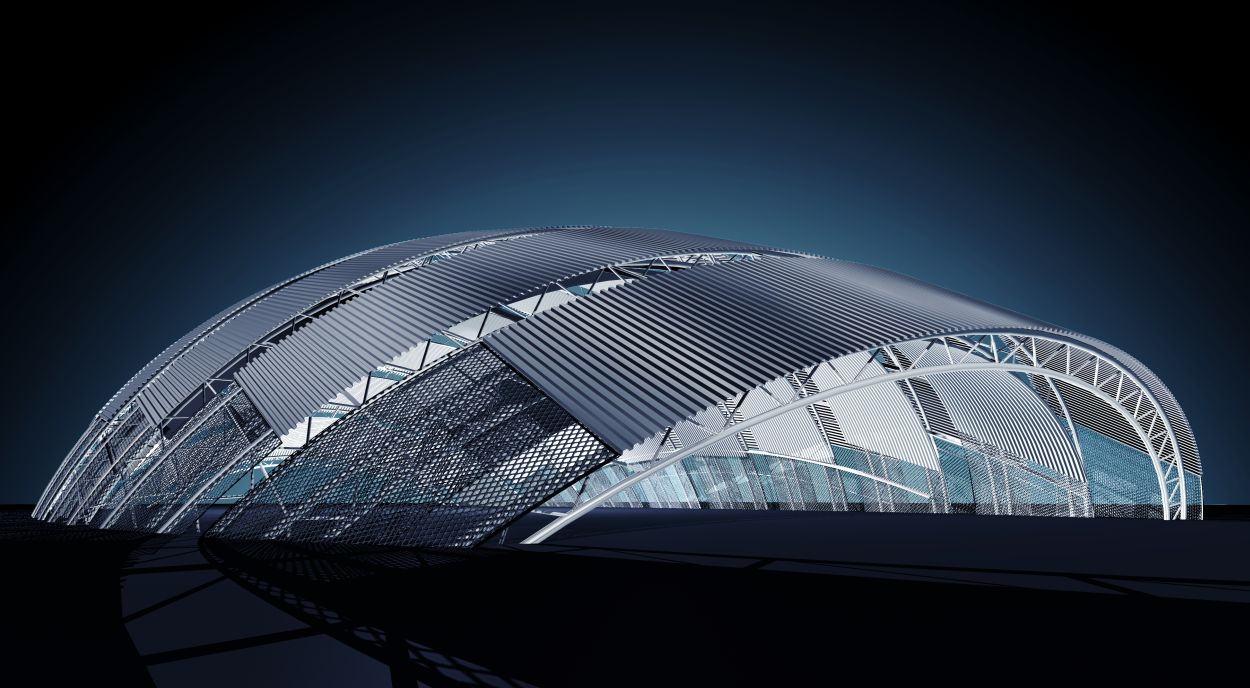 Located on the resting area of Mannekensvere on the E40-A18 highway, a flat site surrounded by fields stretching as far as the eyes can reach, the project proposes an arrangement of the three elements that characterize a service station – i.e. parking lots, tanking areas and shops – under a single protective metal shell. This concentration limits the impact of the tarmac areas on the landscape, freeing as much natural soil as possible from any constructions. It answers the care for sustainable development which is one of the major issues in the project brief.

The structure of the shell is composed of steel two-dimensional lattice arches rotated every 5 m around an axis following the geometry of a torus. The radius of the torus is 85 m, the upper and lower radii of the arches respectively 25 m and 24 m. The height of the arches keeps lateral thrusts low, therefore reducing the importance of foundations and their ecological burden on the site. Windbracing is insured by a set of crosses that bind the 2 arches situated on either side of the central axis. IPE200 steel sections bind the arches together longitudinally to give the ensemble its stiffness.

The roof cover is made of corrugated steel, alternatively fixed to the upper and lower sections of the lattice arches. The corrugated steel cover is interrupted 5 m above ground level, the bottom part of arches being clad with expanded metal sheets whose transparency insures the proper perception of the retail outlets from the highway. In the winter, they protect users from cold winds. In the summer, they can be lifted to let in a refreshing breeze to cool the space underneath the shell.

Indirect natural lighting is provided in the covered space by the reflection of daylight, first on the lower roofs, then on the bottom of the upper roofs through the void which separates the two roof levels. At night, red light comes out through the interstices of the cover and confers a mysterious character to the structure.

The shops consists of wooden modules freely disposed inside the shell. A simple steel structure supports the prefabricated wood panneling of their facades. Their floor, also wooden, is dissociated from the soil in order to create a highly ventilated void under the building. This technique reinforces the removable character of the constructions, barely laid over the land, while their overall visual aspect recalls the beach cabins of the nearby Belgian coast and conveys the pleasant feeling that the site could easily be reconverted to its original aspect.

The metal shell is flexible and entirely removable. As requested by the authorities issuing the concession to exploit the site for service stations, it can be adapted to accomodate a variety of programmes after the expiration of the concession (30 years). Easy to insulate, waterproof, soundproof or blind, the construction could host a concerthall, become a large birdcage, accomodate permanent or temporary exhibitions, etc.