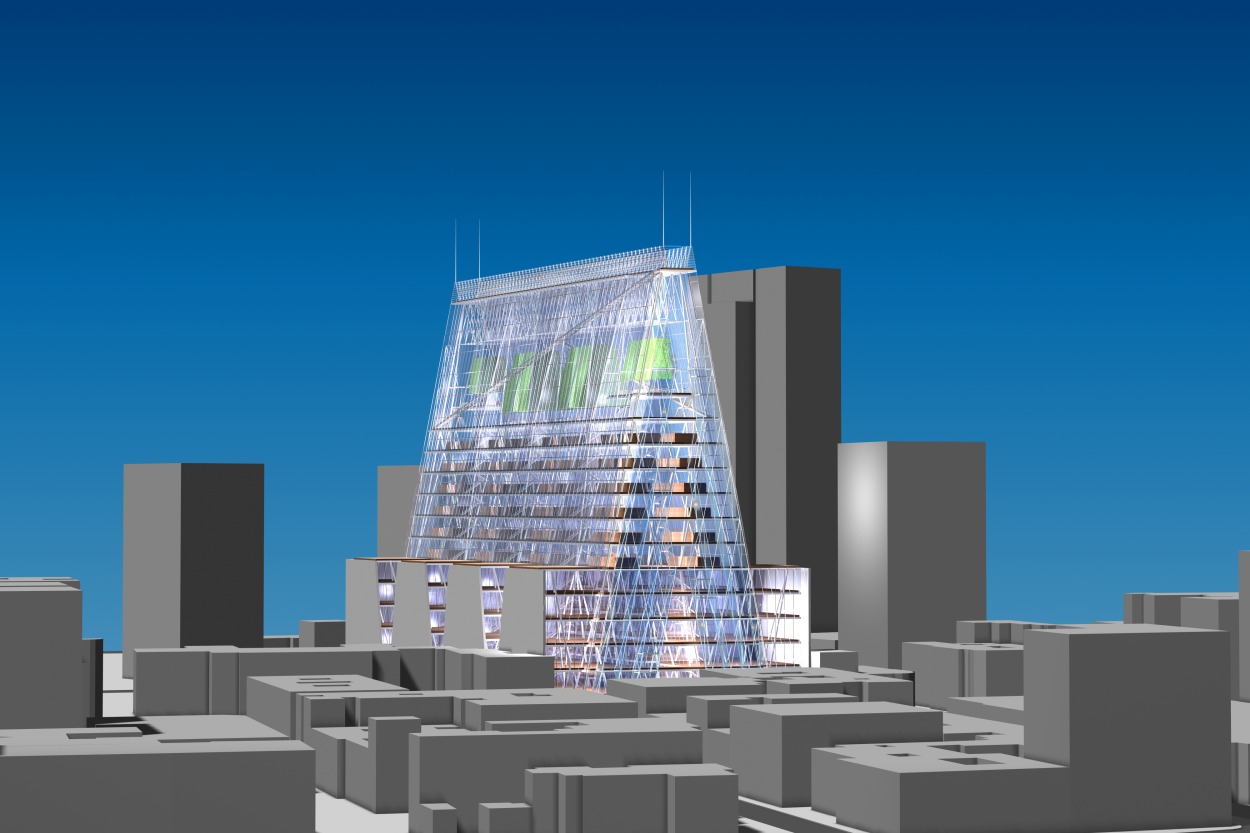 The project is a convivial and ecological building intended to be a landmark in the city. In regard to its function, the building must express the transparency of democracy and its closeness to the community.
The purpose of the project is to show the importance of the social function of the Chilean Social Security administration (Instituto de Normalización Previsional) to its affiliated members and to all Chilean citizens. Transparent, integrated into the environment and respectful of its surroundings, the building is designed to be friendly and open to its users as well as to its visitors. As a result, each visitor can observe the functioning of the institution.

Besides the underground levels, the building has two distinct parts :
a base containing 6 levels, occupying the entire site, on which rests a thin tower of varying width, also including 6 levels surmounted by a vast glazed nave.

On the whole length of the building, a 6-level high interior street – narrowing towards the top – divides the base longitudinally into two identical parts. Each part is in turn divided into 4 units, each lit with a funnel – shaped well, partially occupied by cross atria opening into the interior street.

The upper tower is also subdivided into 4 units separated by voids which ensure natural lighting and are in relation with the glazed inner street.

The public spaces are distributed by the 6-floor high interior street which links the Vicuńa Mackenna avenue with the Ramón Coravalán street. This interior street is flooded with natural light and with the northern sunshine penetrating by the three vertical atria surmounting it at the top of the building.
The light and the presence of the sky in the building humanize the interior of the atrium where the stairs and the footbridges can be perceived. Conviviality and exchange take place in the most illuminated spaces.

The general geometry of the building results from the constraints of the city planning building envelopes, as well as the desire to light naturally all the useful areas of the building and to offer clear and understandable vertical and horizontal circulations. With its huge atria, it is also the result of a will to develop an air conditioning system which uses to a maximum the termal mass of the building.

The organisation of the floors and their supports, consisting of a whole series of columns integrated in the architectural layout, is sufficient to ensure the wind bracing of the building even when submitted to earthquakes. This structural morphology frees the composition from any opaque wind bracing core.
Each floor, with a varying geometry, is accessible by two sets of panoramic elevators, placed on the two frontal facades. The main circulations link the elevators sets on a straight line crossing successively each of the eight units and each of the six cross atria, with a stair in each of them. All circulations loop to avoid dead ends.

The façades of the building are layered following the principle of the double skin, frequently used by Samyn and Partners. The system, consisting of two clear and transparent glass sheats, as well as Venetian blinds, allows a perfect thermal control of the building, limiting the heat from hot and sunny days and taking advantage, during cold days, of free calories stored between the two glass skins. Integration of photovoltaic cells in the exterior glass skin of the northern façade can be considered.

The location of sanitary rooms is free. They are easily removable given the interconnection with the technical networks in each column and in each lateral wall thanks to a carbon filter ventilation unit. Hence, the sanitary rooms can best be located for functional needs and for the organization of team work, floor by floor.

The proposed architecture allows sufficient flexibility to the building so as to be adapted without important additional costs, thus enabling other institutions of firms to use it in the future.

On the top floor, a cafetaria with a garden offers the possibility for leisure and lunch, and the possibility to admire the beautiful view of the town and the Andes Cordillera.

At the summit of the building, a terace crowns the top of the glass roof 72m above the streetlevel. It is accessible by a stepped ramp, rising gently 24m alongside the glazed facade