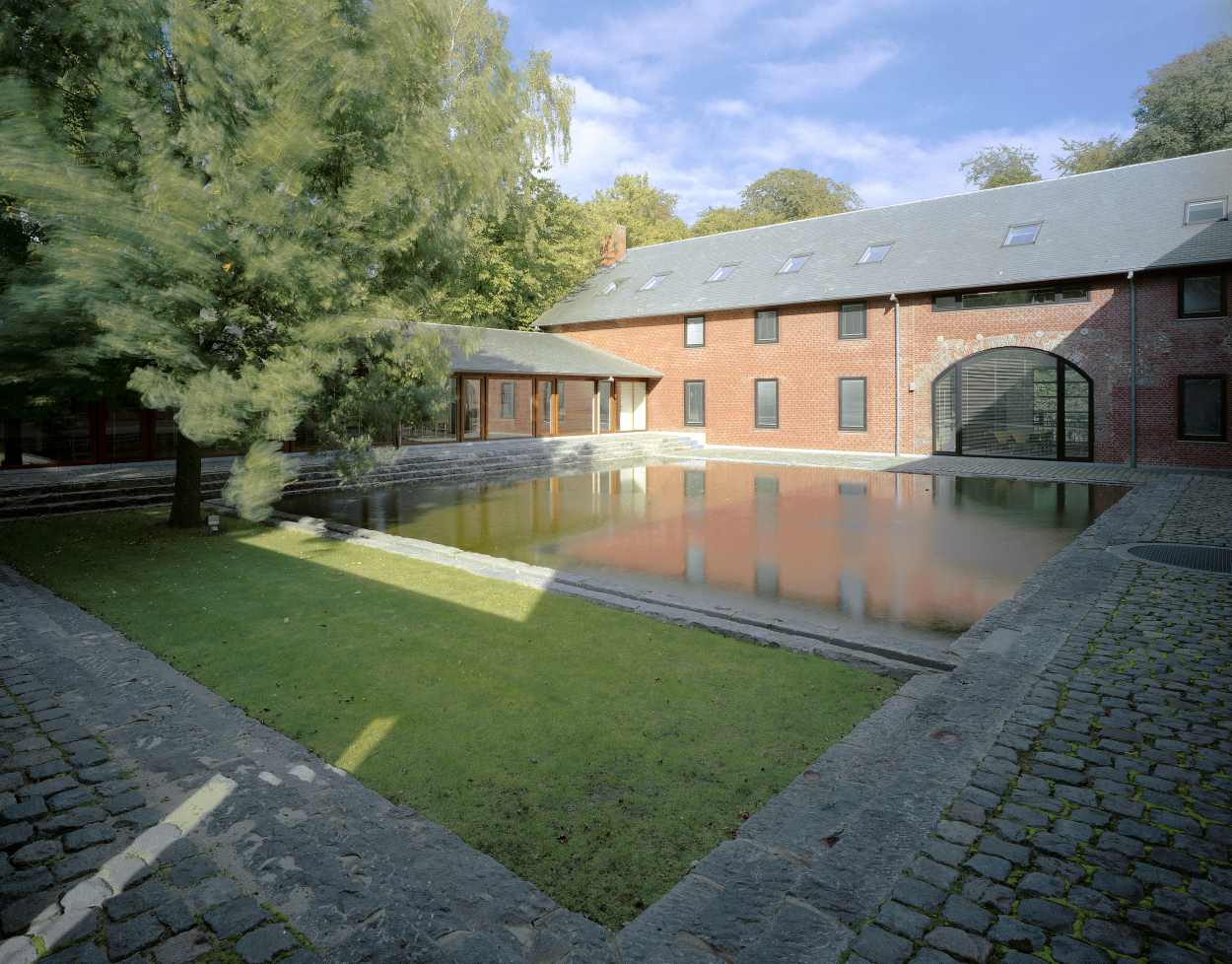 265-Offices of Samyn and Partners

The farm built by Baron de Stassart around 1830 was used as such until the late 1960s. Thereafter, it housed the “Ferme” restaurant and then the “Circus” night-club, before becoming the subject of intense real estate speculation.

Samyn and Partners acquired control of the 3 200 sqm farm site in November 1991 with the aim of restoring and transforming the farm for their own use.

Located at the southern tip of Brussels, the farm borders the Sonian Forest and is surrounded by large green private properties.

Two rectangular wings at right angles, of 1.000 sqm each and comprising three levels, are completed with a single level L-shaped building of 600 sqm so that together they enclose an inner court with a reflecting pond.

The restoration work mainly consists of forging the 1.5 to 2.5 m deep underpinnings of the 202 m-long existing masonry walls, repairing the old masonry work (replacing many softbricks piece by piece), vaulted brick floors, and timbering on the roof.

The building is treated with sobriety, with all visible masonry, vaults and new concrete floors painted white; all of the woodwork (window frames, doors, stairs and raised floors) is merbau.

The window frames, flush with the outside façade, have insulated splayings to avoid cold bridges and are covered with mirrors to increase the diffusion of natural light.

The heating system is a classical central system, with a Tichelmann loop and freely expandable insulated piping.

The interior space allows for 125 workstations.

The existing farm structure had deteriorated badly over time; the barn walls in particular being out of plumb by more than 156 mm with 165 mm bulges; and many badly baked bricks needed to be replaced one by one.

The project is conceived so as to permit other architectural uses for the structure in the future, such as residential housing. Special attention was therefore given to the morphological organisation.

By contrast with common beliefs and despite the technological difficulties that were experienced, refurbishing this type of old structures can be done to a financial advantage.

Security works, such as entrance airlock, partitioning of the low-rise wing and of the cafeteria, exterior perimeter cameras, access control with badges, are executed in early 2020. These interventions guarantee high-level confidentiality in the treatment of the files.